I have been recording professional records for 30 years, acting as producer, engineer, composer, multi-instrumentalist, studio designer and studio owner.

I record primarily to Logic Pro as well as Pro Tools on a Mac Quad Core system loaded with Waves and many other third party libraries.

After many years of making records staring through double layered glass, like an evil scientist in a lab coat looking down at his hapless victims, I've become a big fan of open environment recording, preferring to be in the same room as the musicians I am recording. I'm a musician also, so it only makes sense to be a part of the process, rather than harping like an offshore critic hiding in the next room. Sound kinda radical? It seems to work for guys like Daniel Lanois and Peter Gabriel at Real World Studios. I don't know, some of my favourite records are made this way - in somebody's farm house, or better yet, in a grungy warehouse or garage - you know, places that bands usually play in in the real world. As a young engineer I worked with Guess Who alumni Greg Leskew in his beautiful studio on the Lasalle River in St Norbert, and every 75 minutes or so a freakin CPR train would go rolling thru his front yard - usually signaled a good excuse to have a break, but damned if I didn't make some great records there, including most of the early Crash Test Dummies Demos.
My new room will have reasonable rates in a comfortable space, with a host of in house studio musicians on call, some great recording gear, some great contacts to get your recording mastered and listened to, and a friendly relaxed atmosphere to do what you do best - create great music! 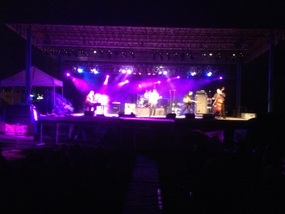